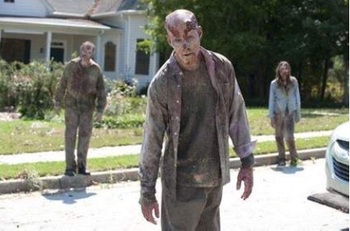 I swear to God I feel like one of these. But instead of craving flesh, I want booze!!
When you stop living anything that bears even a tiny resemblance to a life, then you know you have to surrender.

At least that’s how it’s happening for me. And I am one stubborn piece of alcohol- addicted shit. I mean, I will not let this go. I’m still determined to do whatever it takes to keep this monster in my life. I am desperate to learn to control it, to harness it, to work with it. I am still clinging to the unrealistic hope that I can find a way to let it live and allow myself to live, too.
​
Or die trying, which I believe to be a perfectly acceptable outcome at this point. My god am I sick.

The following is a ridiculous analogy, but since I was raised by a television set, it works for me. The Walking Dead. That barn. That poor sweet old farmer who could not accept the fact that his bitten loved ones were no longer human beings. He kept those killers alive because he believed they could get better. But as his denial grew, so did the zombies. And eventually, reality had to be faced, in the form of a 10-year-old “infected” child. A ten-year-old walker. A killer. Pssst — nerd alert.
And wait, where was I going with this? Oh right.

My alcoholism is my walking dead. My zombie. My walker. It is turning me into a non-human-being that craves one thing only: alcohol. Obliteration. That cool liquid comfort that becomes more fleeting with each new, substance-addicted day. And as long as I let this continue, I will always drive people away. If only it were as simple as a shot in the head.

I know I’m not saying anything new. I’ve read words like these a million times over, but I never got it. Never really understood it. Never ever believed that it truly applied to me. Because I’m special. I’m different. I’m going to be the one alcoholic who learns to tame her walker. I'm going to be the one zombie who can play nice with the unbitten.
Ha ha ha.
So I guess it would make sense that I'd take beauty tips from the people that create these hideous beasts. I've decided to stop hiding behind the fresh-faced editor facade and instead embrace what I really am. What, sadly, I've become. A booze-drinking zombie.
Moi.
I wish I had a great ending for this post. I wish I could say that I've embraced AA (which I so respect and long to understand) and am on my way to a life of sobriety.
But sadly, I can't. I am still struggling. I am still bantering with the beast. But at least I can write about it. At least
I can be honest. I have no shame in admitting the fact that I'm an alcoholic--that's not my issue. My issue is
much more simple (and sad). I just can't give it up. I just can't let it go. I want to drink.....that is what drives me. I'm now a zombie, with only one thing to long for. Not flesh, but fantasy. Not death, but denial. And a drink. Drink, drink drink.